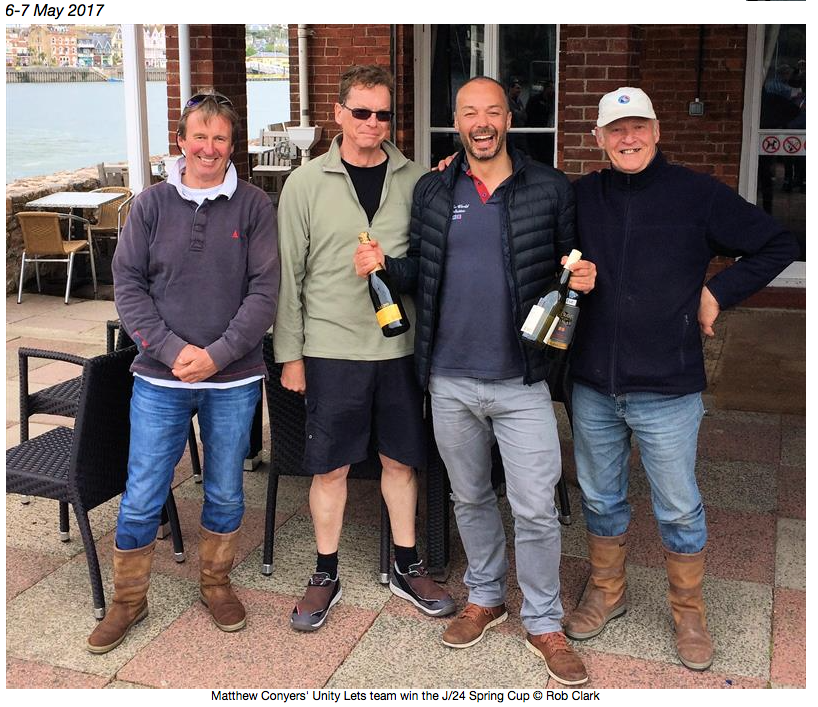 ‘It’s been emotional…!’ Was the general consensus of sailors and race committee alike as the post race analysis unfolded following ‘Swelly Saturday’s’ on water experience! Previously effervescent members of the J/24 fraternity drifted ghostlike through the welcoming clubhouse of the Royal Dart Yacht Club until a little sustenance brought some much needed colour back to their cheeks.

The forecast promised big wind and big swell and 50% of that prophecy was 100% correct.

The fleet set to sea to find the overnight storm had left a light to moderate breeze and a large easterly swell running at approximately 45 degrees to the wind – truly uncomfortable and unforgiving. Richard Stevens and his race team set the fleet a long beat to help us get into the groove of the conditions and, with the first signs of nausea presumably the cause of unusually good behaviour, the J/24s managed 3 clean starts without even the threat of a black flag.

By the time race 2 started, most boats in the fleet were considerably lighter than when left the club with a few sailors deciding ‘today is not the day’ and taking the RIB taxi to shore and stability…

Through this one team, Matthew Conyers and his crew on Unity Lets, showed that consistency is key with a score line of 2,2,3 to lead the regatta going into the half time break.

However, before the recess, the fleet were offered a fourth race to enable the discard… at this moment Nick on Jawbreaker managed to emerge from his sea sickness coma and respond with ‘no thank you, we’d like to go home please’. I doubt many in the fleet disagreed!

Act 2 – Sunny Sunday – Beware what you wish for

As Sunday dawned the J/24 fleet headed towards their boats, expecting kinder conditions and more close racing. However the weather gods were in no mood to cooperate and, despite several reconnaissance trips to the bay the race team had to admit that AP over A and an early lunch was the order of the day.

All that left was time to discuss the previous days pleasure and pain in more detail, now that we all felt a little stronger. The J/24 is not a class renowned for creature comforts, especially for members of the fairer sex, and Lorna’s description of the ‘two bucket technique’ will leave me with a harrowing visual image that can’t be simply washed away!

With the racing wrapped up Matthew Conyers led his team to the top step of the podium and thanked his dad, Daryl, for telling him where to go. Unusually for the Unity Lets crew it appears that Mr Conyers Snr had mastered diplomacy in conveying this information resulting in consistent, fast sailing and minimal on board scuffles.

David Cooper and the Jawbreaker team took the silver medal for the second regatta in a row and keep his campaign for the 2018 Worlds in Garda firmly on track.

As for your correspondent, we were left to wonder what may have been. Having lost 2 crew members and sat out race 2 we managed to sail 3 up (apparently I need to point out this included Zoe) and take the win for the final race of the day. Unfortunately this wasn’t quite enough so the bronze medal was ours, and with it the honour of writing this report…

Huge thanks go to the team at RDYC for their hospitality and support of the class. We will be back in 2018.

As for 2017 our attention turns to the Southern Areas at Parkstone YC on the final weekend in May. Details can be found on the class website, www.j24class.org.uk

This entry was posted in Uncategorized. Bookmark the permalink.