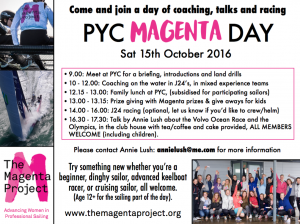 What started as an opportunity for women in offshore sailing to show that gender doesn’t hold you back, very quickly changed into something far larger than the race. People were challenged to view women differently.

In one of the few sports where women are able to compete directly against men on a level playing field, where strength and experience differed training, development, teamwork and persistence got results.

Inspiring people around the world to take that step socially, emotionally and professionally through empowering women and now The Magenta Project.