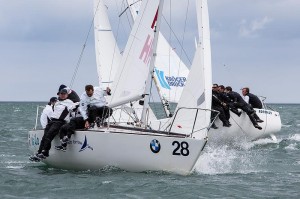 In a tense and closely fought final day, Tim Healy and his crew from Newport, Rhode Island, on board ‘Helly Hansen’ were impressive winners of the BMW J24 World Championship at Howth Yacht Club (near Dublin, Ireland), with eight top-five results (including three race wins) in the 10-race series.

Healy, who previously won the title in 2010, was pushed all the way by the defending champion Mauricio Santa Cruz from Brazil on ‘Bruschetta’, who also demonstrated remarkable consistency, but who had to be content with the runner-up spot, four points adrift of his rival.

Third place overall went to another American crew led by Travis Odenbach from Rochester on ‘Honey Badger’ who had been the series leader overnight but who did not enjoy the final day. A 20th and an 8th effectively knocked his chances, although he was only two points off Santa Cruz in the end.

In fresh westerly winds which touched 25 knots at times, the penultimate race saw a second win in the series for Britain’s Ian Southworth on ‘Il Riccio’, ahead of fellow Briton Bob Turner’s ‘Serco’. Third place went to local Howth skipper Mossy Shanahan on ‘Crazyhorse’, following up on his great form the previous day, a result which contributed to him finishing as the top Irish boat overall in 19th place.

Success in the last race went to the German boat ‘Rotoman’ (Tobias Feuerherd), with Keith Whittemore (‘Furio’) from Seattle 2nd and Santa Cruz 3rd. The Brazilian, however, needed Healy to be further down the fleet than his finishing place of 5th and so surrendered his world title to the American crew by four points after the one allowed discard.

With the exception of the Tuesday when racing was abandoned due to lack of wind, the championship featured four good racing days, with the wind strength progressively increasing as the week went on. There were six different race winners and the four US entries all finished in the top 10 which featured two German boats and the sole Italian entry.