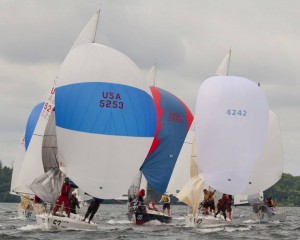 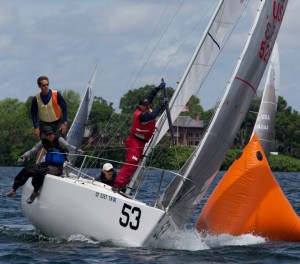 Mike Ingham of Rochester Yacht Club and his crew on USA5443 have earned the title of J/24 US National Champions at Wayzata Yacht Club in Minnesota. With just 10 points in eight races, the team comprised of Ingham, Tim Healy, Scott Ikle, Quinn Schwenker and Gordon Borges notched an extraordinary line of 1,(3),2,1,2,2,1,1 in the three-day event. Travis Odenbach, also of Rochester Yacht Club, placed second with 22 points on Honey Badger. Local Rolf Turnquist’s Oz came in third at 24 points, with Bill Allen at the helm.

On Sunday, the breeze on Lake Minnetonka was 13-15 knots, and three races were accomplished. “It was a little bit shifty, but you could actually connect the dots,” said Ingham. “We started conservatively in the middle of the line every race. If we’re patient, get a good start so we’re going fast, and stay patient to the first shift, then once we got in phase it was a lot easier.”

The regatta began Friday in very light air when only one race took place. Saturday dawned more promising, and four races were completed. “The first two days were more than just shifty, it was die and fill, so the wind would go away,” summarized Ingham. “Whatever it took to get to the next pressure, we were concentrating on going fast toward that pressure. And not just small puffs, but looking for trends like a wind line coming from one side to the other.”

Complete results may be found at www.j24usnationals.com