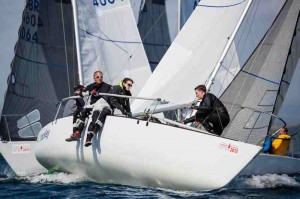 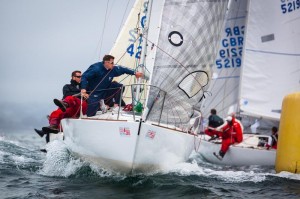 25 teams from the UK, Ireland and USA headed to Plymouth to contest the UK Nationals at the start of July.

With 10 races scheduled over 4 days the race committee wasted no time getting going with 3 rapid fire courses set on the first day to ensure the fleet completed a series given the patchy wind forecast. The following 3 days settled into a pattern with competitors enjoying lazy mornings in the balmy conditions whilst waiting for the sea breeze to fill and then as the wind arrived revelling in the close quarters racing and tight calls at every start, mark rounding and finish. With a matter of boat lengths separating first to last on the water this was one design racing at it’s very best. Sailtracker units were carried on all the boats meaning friends and families could watch races unfold from shore and over 1300 visitors logged in to check on the action across the 3 days of racing. You can still view the feed via the SailRacer site – http://events.sailracer.org/eventsites/live-racing.asp?id=25960&eventid=174356&templ=j24_live

With an all star cast including the 2010 and 2011 European Champions, 2013 US National Champions, as well as multiple UK and Irish National titles shared between the teams racing was always going to be tight, with 6 different teams taking race wins from the 9 races contested and consistency being the key to establishing a good series. Masters of this were Chris McLaughlin / Ian Southworth and their Il Riccio team who, with every result inside the top 5, put enough space between them and their closest rivals to be able to reclaim the UK National Championship crown last held by them in 2006.

Next up is the summer regatta season with a number of J/24’s intending on heading to Yarmouth, IOW to join in with the fun at the Tattinger Regatta at the end of the month.