By Will Harris, Waterline Systems 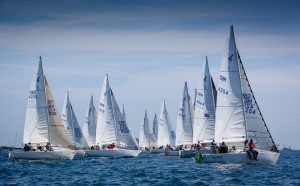 In some circles, it’s cool to trash the J/24 “because it is hard”. Yep, it’s hard all right. It’s supposed to be. With 35 years of tuning guides written by the likes of Dave Curtis, Vince Brun, Kenny Read, Terry Hutchinson and Tim Healy, everyone can get the boat set up right. From there, it just boils down to sailing really, really well. Tacking the genoa is hard, but the guy next to you is going to tack it perfectly. Getting five guys all in synch on maneuvers is hard; but again, the guy next to you is doing it. Crawling under the boom on tacks is kinda hard, but if I can do it… well just shut up. It is no wonder the J/24 class has been the starting point for getting to the sailing Hall of Fame! Racing this past summer at the J/24 North Americans was a great reminder of the value of this class. When Mike Marshall of North Sails asked me to sail with him in the Newport event, I jumped at the chance. I was particularly psyched because I’d get to sail with a bunch of young guys – some of whom were not alive when I won my first NA’s. Mike, Tom King, and Mike Nicoletti are all in their 20s, while Nick Sertl was playing hooky from high school to sail the event. Me – well let’s not talk about my age…If I had to choose one word to describe a high level J/24 regatta, I’d suggest “relentless”. If you make any little mistake, you lose boats – every time. A bad start puts you in the wayback and the guys in front aren’t making mistakes. Even when you are way back, you can’t give up. Even the best guys are having those kinds of races occasionally. Every boat you can claw back is going to make a big difference in the point total at the end. It is truly a game of inches in this class. If you are looking for an easy class to jump into and win with minimum effort, I’d suggest that the J/24 class might not be your best choice. That’s why I like sailing with the young dudes so much. Guys like Mike or Travis could probably crush in many classes. They are looking at the long game — scratching and clawing up the J/24 ranks is like grad school for sailors. There are plenty of used J/24s for sale and you don’t need the ‘best boat’ to be competitive…